skip to main | skip to sidebar

A few hours ago, the AP reports that a new record was broken on oil price futures.

Light, sweet crude for April delivery jumped $1.65 to settle at $100.88 a barrel on the New York Mercantile Exchange. At one point in the session, prices surged as high as $101.15.

The days of oil trading at over a $100/barrel are upon us and may be with us for the foreseeable future. How did this all happen? Many people have much to say on this topic. I'm fascinated by the charts that show how it creeped up on us. The following chart came from the Energy Information Office.

Yesterday the website MaineEnergyInfo.com reported that heating oil prices are continuing to go up, citing a survey from the State of Maine Office of Energy Independence and Security which found the statewide average price for #2 heating oil to be $3.37 a gallon! This is over $1 more than it was last year at this time. I created my own chart of New England heating oil prices since I couldn't find one on the web. 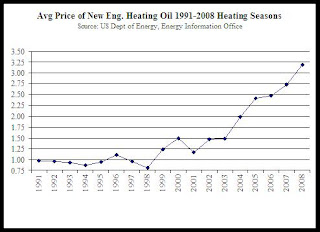 When the figures are laid out there, it is plain to see why complacency in making homes more energy efficient was common in the the nineties. It was only a dollar a gallon! Big deal! Then by the early 2000's, the creep upwards began to become a steady trend. With each passing year, homeowners and building operators felt the sting of higher prices and thought "Gee, we got to do something about this oil bill!" but what? The next year, the process repeats itself. Now, in 2008 with prices having more than doubled in 5 years, it is definitely time to do something.

2007 - The Year of Peak Oil, Climate Change, and Energy Efficiency

The year 2007 may well go down in history as the year that the world fully accepted the converging perfect storm of climate change, peak oil, turbulent energy markets, and the pervasive (but avoidable) waste of energy in modern civilization.

Many oil experts, such as Matthew Simmons, a major energy banker with a summer home in Rockport, Maine, think Saudi Arabia has or will shortly peak in oil production and points to the secrecy of Saudi Aramco on actual oilfield production records. In an interview with Bud Conrad published last year, he explains some of the background behind his assertions. It appears that the once vast oil fields of can no longer play their historical role as swing producer to relieve price surges in oil markets.

OPEC, in its meeting on September 11, 2007 raised production quotas by a token half a million bpd. It is widely viewed as meaningless since they have already been claiming (without independently audited evidence) to be pumping 1 million bpd over its official quota of 28.5 mbpd. So there is no price relief, just a shell game. It is reported by AFP that OPEC is not going to do anything at it's upcoming meeting on March 5th.

New York prices of 101 dollars reflect widespread market expectations of a production cut by the OPEC crude producers' group, OPEC president Chakib Khelil said in a statement to the Algerian press on Monday.

Khelil indicated that the 13-nation Organization of the Petroleum Exporting Countries would not increase production at a meeting on March 5 in Vienna, Austria, signaling output could be held steady or reduced.

"Either we hold (output) steady or we cut in order to restore market balance and stability," Khelil said.

Every oil producer other than Saudi Arabia has pretty much always strained just in maintaining current production levels, let alone increasing production to relieve price escalation. Now it seems that OPEC won't (some say can't) increase production right at the time when prices are most in need of relief. In fact, there is no incentive to do so since higher prices bring greater oil profits. In fact, oil companies like Exxon and Chevron are posting record profits (see AP report).

The only reason Aramco was willing to sacrifice overproduction and long term damage to their massive oil fields to keep prices down in the 70’s was due to the lame duck liquidation strategy of American oil company owners with no vested interest in preserving an asset they would soon be surrendering to the new Saudi owners of Saudi Aramco in 1980. After that, intense political and economic pressure was brought to bear on the Saudi’s to keep oil flowing fast and cheap. Now that the dollar is devalued and Saudi oil producers are resorting to extreme measures (they are pumping more water than oil, in fact) to maintain production in the now mature but once great oil fields, we are in new territory.

Bad US relations or government instability with top producers adds to the problem of price volatility. The existence and effects of peak oil are no longer an extremist idea in energy economics.

People of the world, and even Americans, are now paying attention to the harmful climate altering side effects of carbon based energy consumption. World scientists were shocked last fall at last year’s summer thaw of the Arctic ice cap, which had the most dramatic drop in perennial ice since satellites have been photographing the region. The New York Times has a great website with an interactive demostration of the ice cap over the past few years. This problem is compounded by the fact that the new open water areas now receive much higher solar gains than the reflective white ice, further exacerbating the problem. What is in store for this summer's ice melt?

While Europe has been making great strides to reduce carbon emissions for decades, the has only recently put a focus on carbon reduction. Now that public opinion has come to accept climate change as real, dramatic shifts are occurring. The movie, “An Inconvenient Truth” has raised consciousness as has the awarding of the Nobel Peace Price to Al Gore a few months ago. In the film “11th Hour” Leonardo DiCaprio hosts a depiction of the problems of carbon emissions and fossil fuel depletion and solutions that our generation needs to implement to preserve our civilization.

All the major 2008 Presidential Candidates have plans for CO2 reductions. Obama and Clinton have similar plans, well detailed on thier websites. McCain has demonstrated leadership on Climate Change in his efforts in Senate

Citizens, businesses, organizations, and local governments are increasingly taking the lead role without waiting for Federal government programs and regulations regarding carbon emissions.

Former President Clinton’s foundation, the Clinton Climate Initiative, announced last May the creation of a global Energy Efficiency Building Retrofit Program. Siemens and the other three of the four largest ESCOs (Energy Services Companies) in the world – Honeywell, Johnson Controls, and Trane – have agreed to scale up their capacity to do large numbers of building retrofits across C40 partner cities that are participating in the program. They are to provide performance contracts financed by a pool of $5 billion provided by some of the largest banks in the world.

The organization, Architecture 2030, has lead the effort to make a difference in CO2 reductions by reducing the energy consumption of buildings by better design. Last month, they posted a webcast, "Face It", which highlights startling facts about buildings and energy. They point out that buildings are responsible for 48% of all the energy consumed in the US.

With crude oil just now reaching over $100/barrel for the second time and complications in production and refining not expected to improve anytime soon, an unparalleled market force in is play, encouraging investment in energy efficiency measures.

We all live and work in buildings. We already have the knowledge and technical know-how to do some thing about it.

Lets FACE IT and DO IT!
Posted by Richard W. Riegel Burbank at 9:00 PM

You hit the nail on the head. Nice job of bringing it all together in an interesting, easy to read format. I will be using your blog as a valuable tool in convincing those I work for to pick up speed along The Green Path!

Questions about energy and buildings?

In this blog, you have the chance to get answers to your questions about energy, buildings, and building performance. Any questions regarding insulation, sealing drafts, mold and indoor air quality, reducing your fuel consumption, etc. are welcome.

Email your questions to richard@evergreenhp.com

Richard W. Riegel Burbank
Richard Riegel Burbank founded Evergreen Home Performance LLC in 2006. The Rockland, Maine based company provides building diagnostics and building envelope installation and renovation. Their projects range from installing cellulose in new construction and retrofit, air leakage reduction in residential and commercial buildings, and moisture mitigation in basements and crawlspaces. He is one of the first Building Performance Institute certified analysts in Maine, and an affiliated contractor with Maine Home Performance with Energy Star and ZeroDraft. 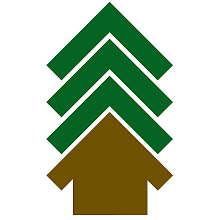